As we grapple with the COVID-19 pandemic, another crisis looms over our future: overfishing. Fishing fleets and unsustainable practices have been emptying the oceans of fish and filling them with plastic. Although other countries are also responsible for overfishing, China has a greater responsibility. Why is looking at the Chinese fleet important? China has almost 17.00 vessels capable of distant water fishing, as reveals for the first time an investigative report published by Overseas Development Insitute, Londres. 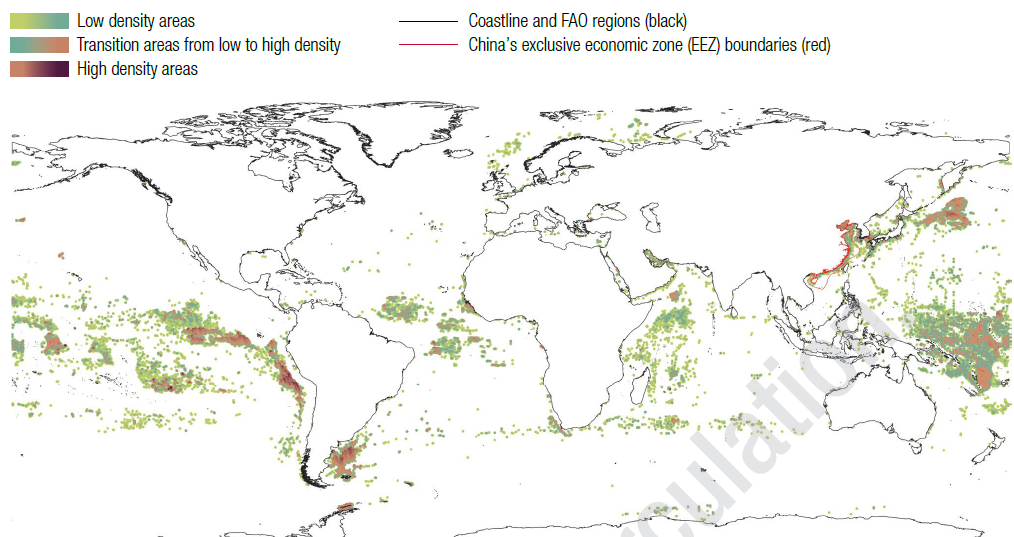 As part of a team of researchers at the Overseas Development Institute, London, I had access to the world’s largest database of fishing vessels. Combining these data with satellite data from the automatic identification system –which indicates their movements—, we were able to observe their behaviour for two years (2017 and 2018). To do this, we employed big data analytical techniques, machine learning algorithms, and geographic information systems to describe the fleet and analyze how it behaved.

And the first thing we noticed is that China’s fishing fleet is five to eight times larger than any previous estimation. We identified a total of 16,966 Chinese fishing vessels able to fish in “distant waters”, that is, outside its exclusive economic zone, including some 12,500 vessels observed outside Chinese waters during the same period.

Why is this important? If China’s DWF fleet is 5-8 times larger than previous estimates, its impacts are inevitably more significant than previously estimated. This is important for two reasons. First, because millions of people in coastal areas of developing countries depend on fishery resources for their subsistence and food security. Second, due to this extraordinary increase, it is difficult to monitor and control fishing activities in distant waters of China.

The other thing that we observe is the most frequent type of fishing vessel is the trawler. Most of these Chinese trawlers can practice bottom trawling, which is the most damaging fishing technique available. We identified some 1,800 Chinese trawlers, which are more than double what was previously thought.

Finally, of the nearly 1,000 registered vessels outside of China, more than half have African flags, especially in west Africa, where law enforcement is limited and fishing rights are often limited to registered vessels in the country, which explains why these Chinese ships have adopted local flags.

What can be said about the ownership of these fishing vessels? It is very complex. We analyzed a subsample of approximately 6,100 vessels to discover that only eight companies owned or operated more than 50 vessels each. That is, there are very few large Chinese fishing companies since small or medium-sized companies own most of them. However, this is only a facade, as many of these companies appear to be subsidiaries of larger corporations, suggesting some form of more centralized control. The lack of transparency hampers monitoring efforts and attempts to hold those responsible for malpractice accountable.

But another exciting facet of the ownership structure is that half of the 183 vessels suspected of involvement in illegal, unreported or unregulated fishing are owned by a handful of companies, and also that several of them are parastatal. This means that focusing on them could solve many problems because these companies own other ships.

There has been an extraordinary boom in Chinese fishing activities that is difficult to control. Chinese companies are free to operate and negotiate their access to fisheries in coastal states of developing countries without being monitored, especially in West Africa. This laxity contrasts with the policy of the European Union to reduce its fishing fleet and exercise greater control over its global operations.

This report is a data activist project that aims at redressing the unfair situation for nations, especially in west Africa, that cannot monitor and police their waters.

This is a version of an op-ed published in Spanish by eldiario.es.

About the author: Miren Gutiérrez is passionate about human rights, journalism and the environment (with a weakness for fish), and optimistic about what can be done with data-based research, knowledge and communication. Prof. at the University of Deusto and Research Associate at the Overseas Development Institute. Miren is Research Associate @DATACTIVE.

Please note that the upcoming special issue of Palabra Clave, titled “Latin American perspectives on datafication and artificial intelligence” decides to extend its original deadline (March 21, 2020) for abstract. The deadline has been extended until May the 1st, 2020.

More information on the CfP here:

NEW DEADLINE: Due to COVID-19 situation, we have decided to extend the deadline. The new deadline is MAY 25, 2020

Datafication is changing the conditions under which contemporary social movements operate, opening up new terrains of contention. As a result, grassroots initiatives in the realm of data activism, data justice, algorithmic accountability and/or resistance to mass surveillance mushrooms in liberal and authoritarian regimes alike. These initiatives vary by scale, organizational forms, tactics, political visions and technological imaginaries. They may take data “as repertoires”, whereby data and data-based tactics are mobilized as constituents of innovative tactics, or “as stakes”, that is to say issues or objects of political struggle in their own right (Beraldo and Milan, 2019). However, they share an emphasis on the contentious politics of data.

This Special Issue invites scholars of social movements and critical data studies to engage with i) case studies and ii) theoretical reflections illustrating the evolution of collective action vis-à-vis datafication. We are particularly interested in (interdisciplinary) theory development: fostering a dialogue across disciplinary boundaries, the Special Issue wants to bring the question of datafication -broadly defined -to bear on social movement scholarship, with the ambition of addressing what has been to date a “blind spot” in social movement literature, and cross-fertilizing disciplinary fields that have long remained disconnected.

Consequently, we welcome papers (max 8,000 words) engaging with the following:

• Theoretical perspectives on, for instance, data activism, data justice, artificial intelligence, the relation between protest and social structures in the age of datafication, etc. as they intersect social movements and collective action processes, concepts, and research questions.

• Theoretical contributions on, e.g., the relation between data and the means-ends continuum in social movements, oriented to theory development in the field of social movement studies.

We invite the submission of structured extended abstracts (800-1000 words). Abstracts should be sent to contentiousdata-sms@data-activism.net no later than 30 April 2020. The outcome of the selection process will be notified no later than 15 May 2020. Prospective authors will be given the option to participate in a paper development workshop held at the University of Amsterdam in the last week of August (tentative date). Full paper submission (original articles of no more than 8.000 words) is due on 30 November 2020.

All papers will be subjected to double-blind peer review. For further instructions see the “Instructions for Authors” and “Style Guide” provided by Social Movement Studies.

Please contact us if you have any further inquiries:

Our purpose with this Special Issue is to present and contribute to a body of research that critically explores the relationship between media innovation and social change. In doing so, we also outline the contours of a research agenda to further develop this emerging field. Our motivation arises from a review of research published in the nine previous editions of this journal, where we explored how research about media innovations engaged with the topic of social change. We find that research in the field of media innovations has tended to focus on business and economic imperatives for media innovation, following the paradigm of research on digitalisation introduced by von Hippel’s theories of ‘democratizing innovation’ (2005), Chesbrough’s ‘open innovation’ (2006), or Tapscott and Williams, ‘Wikinomics’ (2011). As a consequence, digitalisation and the introduction of new technologies is usually unquestioningly presented as a business imperative for media industry stakeholders.

On 1-2 February, Stefania will attend the 2.Dh5 Festival in Utrecht, the Netherlands. She will give a presentation on “Surveillance capiralism and the future of data activism” , with a Q&A section (date and time will be announced on the 2.Dh5 Festival website).

Surveillance capitalism is grounded on the transformation of human actions, interactions and emotions into data points which can be quantified, analysed and monetised. It accelerates the crisis of liberal democracies, and changes the role of information and technology in the constitution of our societies. People may react by fighting the aggressive intermediation of the industry, including social media platforms, and the snooping of the state, for example through “smart city” projects. Others may leverage the possibilities for transformative collective action harboured by big data. This talk explores how citizens, social change activists, and variably skilled users engage with datafication looking at emerging practices of “data activism”. It takes stock of the main tendencies we observe on the field, and surveys emerging areas such as algorithmic activism and device activism.

On Thursday 23 Janurary 2020, Stefania will attend the 13th International Conference of CPDP in Brussels, Belgium. She will speak in the panel ‘Online privacy, algorithmic bias, targeted political advertising — an interdisciplinary conversation’ organized by Mozilla. She will join on stage with other speakers: Fanny Hidvegi (Access Now); Matt Rogerson (The Guardian); and Sarah Bird (Mozilla).

With an increasing degree of automation in the systems responsible for content delivery, advertisement platforms and content recommender systems alike are filtering, weighting, and ranking a continuous feed of potential items to provide a tailored experience to each individual based on their personal preferences and past behaviour. The complexity of such systems introduces a sophisticated (and almost totally opaque) new layer to peoples’ ability to access information. Automated decisions drastically impact our access to information and relationship with content serving and journalistic platforms. In many cases, the definition of success for such systems is not based on individual or societal well-being, but rather on some variation of engagement or revenue. A common belief motivating the design and optimization of these algorithms is that more (private) information about an individual equates to a better experience and more valuable advertisement via increasingly specific programmatic micro-targeting. This panel will present a multidisciplinary investigation of the interaction between data collection, the algorithmic nature of content recommendation systems, the commercial forces at play for such platforms and the individual and societal consequences of their prevalence.