We are very pleased to announce you that the magma guide has been released.

What is the magma guide?

An open-licensed, collaborative repository that provides the first publicly available research framework for people working to measure information controls and online censorship activities. In it, users can find the resources they need to perform their research more effectively and efficiently.

The content of the guide represents industry best practices, developed in consultation with networking researchers, activists, and technologists. And it’s evergreen, too–constantly updated with new content, resources, and tutorials. The host website is regularly updated and synced to a version control repository (Git) that can be used by members of the network measurements community to review, translate, and revise content of the guide.

If you or someone you know is able to provide such information, please get in touch with us or read on how you can directly contribute to the guide.

All content of the magma guide (unless otherwise mentioned) is licensed under a Creative Commons Attribution-ShareAlike 4.0 International License (CC BY-SA 4.0).

Many thanks to everyone who helped make the magma guide a reality.

You may use any of the communication channels (listed in contact page) to get in touch with us.

Vasilis Ververis is a research associate with DATACTIVE and a practitioner of the principles ~ undo / rebuild ~ the current centralization model of the internet. Their research deals with internet censorship and investigation of collateral damage via information controls and surveillance. Some recent affiliations: Humboldt-Universität zu Berlin, Germany; Universidade Estadual do Piaui, Brazil; University Institute of Lisbon, Portugal.

Introduction
For over 80 days now, and with no end in sight, Chile has been in the grip of waves of social protests and cultural manifestations with tens of thousands of demonstrators taking to the streets across the country. For many, the upsurge of this social outburst has its roots in a civil society rebelling against an uncaring economic and political elite that has ruled the country since its return to democracy in 1990. Mass protests were soon followed by a muddle of misinformation, both online and in the traditional press. In this blog post, I provide insights into how Chilean activists, including journalists, filmmakers, and demonstrators themselves, have started using citizen-generated data to fight media disinformation and the government’s attempts to conceal cases of human rights violations from the public.

Background
The evening of October 18th 2019 saw how Chileans started to demand the end of a neoliberal-based economic system, perceived among citizens as the main cause for the social inequalities and political injustices that occurred in the country over the last decades. However, demonstrations were met with brutal police repression and several corroborated cases of human rights violations, including sexual torture. To this day, information gathered by national and international non-governmental organizations show at least that 26 people have died and more than 2.200 have been injured during the rallies.

Although I was raised in Chile, today I am living in Amsterdam. Therefore, I could only follow the news as any other Chilean abroad; online. I placed a screen in my room streaming in a loop the YouTube channels of the prime-time late-night news of major media outlets. During the day, I constantly checked different social media platforms like Facebook or Twitter, and from time to time I would get news and tips from friends and fellow journalists in the field over WhatsApp or Signal. Information started flooding every digital space available: a video posted on social media in the morning would have several different interpretations by that evening, and dissimilar explanations would be offered by experts across the entire media spectrum by night.

And this was only the start. Amidst the growing body of online videos and pictures showing evidence of excessive military force against demonstrators, Chilean President Sebastián Piñera sat in on a televised interview for CNN’s Oppenheimer Presenta where he claimed that many recordings circulating on social platforms like Facebook, Instagram, and Twitter have been either “misrepresenting events, or filmed outside of Chile.” The President effectively argued that many of these videos were clearly “fake news” disseminated by foreign governments seeking to destabilize the country, like those of Venezuela and Cuba. Although Piñera later backed down from his claims, substantial doubts were already planted in Chileans’ minds. How could the public be sure that the videos they were watching on their social networks were indeed real, contemporary, and locally filmed? How could someone prove that the images of soldiers shooting rubber bullets at unarmed civilians were not the result of a Castro-Chavista conspiracy, orchestrated by Venezuelan President Nicolás Maduro, as some tweets and posts seem to claim with a bewildering lack of doubt? How could these stories be corroborated when most of them were absent from the traditional media outlets’ agendas?

As a recent study suggests, unlike their parents or grandparents, the generation that was born in Chile after 1990 is less likely to self-censor their political opinions and show a higher willingness to participate in public discussion. After all, they were born in democracy and do not have the grim memories of the dictatorship in their minds. This is also the generation of activists who, using digital methods, have taking it up to themselves to mount the digital infrastructure that makes relevant information visible and, at the same time, accessible to an eager audience that cannot find on traditional media the horror tales and stories that reflect the ones told by their friends and neighbors. Thus, different digital projects have started to gather and report data collected by a network of independent journalists, non-governmental organizations, and the protestors themselves in order to engage politically with the reality of the events occurring on the streets. Of these new digital projects, here I present only two that stand out in particular, and which I argue help to alleviate, or at least they did for me, the uncertainty of news consumption in times of social unrest. 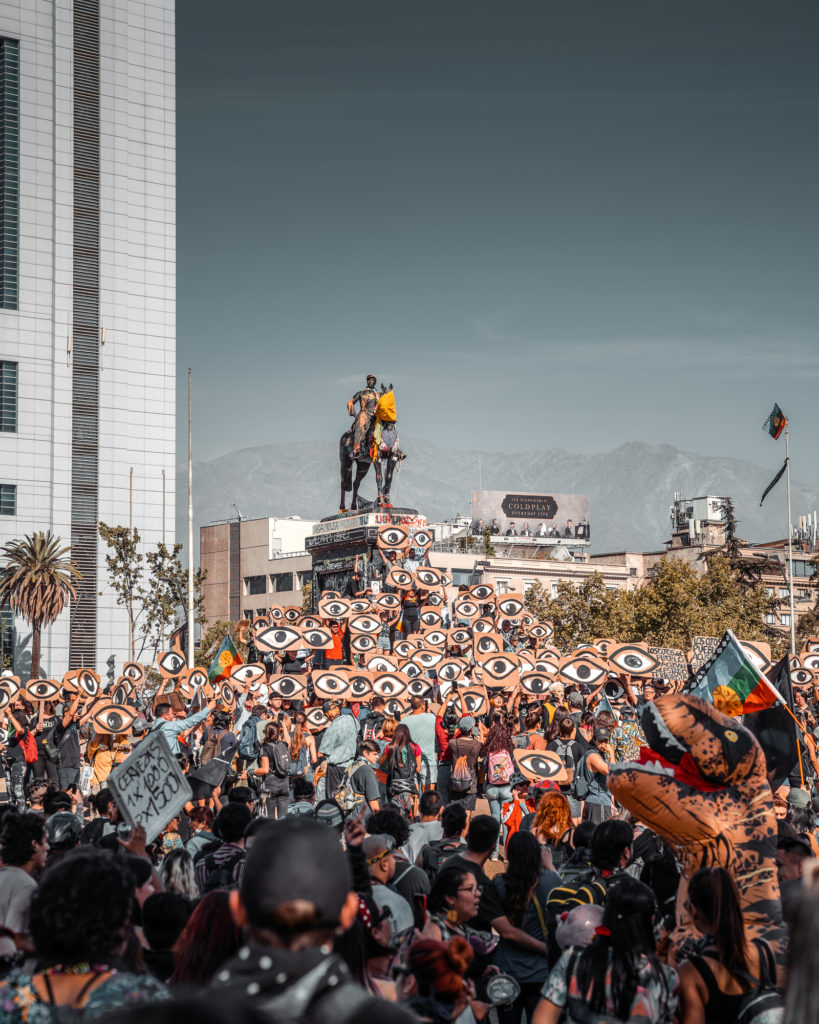 From singular stories to collective data
Only four days after the beginning of the protests, journalists Miguel Paz and Nicolás Ríos started ChileRegistra.info (or Chile-Records in English), a depository of audio-visual material and information regarding the ongoing protests. Chile-Registra stores and distributes videos that have been previously shared by volunteers and social networks users who have attended the rallies. According to these journalists, traditional media could not show videos of human rights violations shared on social networks because they were unable to verify them, and therefore would only broadcast images of riots and barricades, which would later produce higher levels of mistrust between the demonstrators and the press.

As a response to this problem, the project has two main purposes; First, to create a “super data base” with photos and videos of the protests, and military and police abuses. Second, to identify the creators of videos and photos already posted and shared on social networks, in order to make these users available as news source or witness for both traditional media and the prosecutors. National newspaper La Tercera and Publimetro, among other national and international media outlets, did already use this platform to published or broadcast data collected within the depository. By using this project, users were able to easily discredit Piñera’s claims that many of these videos were being recorded abroad.

The second project I would like to draw attention to is Proyecto AMA (The Audio-visual Memory Archive Project in English). AMA is a collective of journalists, photographers, and filmmakers who have been interviewing victims of human rights violations during the protests. Using the Knight Lab’s StoryMap tools, AMA’s users can also track where and when these violations have taken place, and read the personal stories behind the videos that they most probably saw before online. According to their website, members of this project “feel the urgent need to generate a memory file with the images shared on social networks, and give voice and face to the stories of victims of police, military and civil violence in Chile.”

These two projects have certainly different approaches for how they generate content. While ChileRegistra relies on collecting data from social media and citizen journalists uploading audio-visual material, Proyecto AMA’s members interview and collect testimonies from victims of repression and brutality. Although the physical and technological boundaries of each media platform are still present, these projects complement each other in a cross-media effort that precisely plays with the strengths of each of the platforms used to inform the work activists do.

New sources for informed-activism
These projects are at the intersection between technology and social justice, between the ideation and application of a new digital-oriented, computer assisted reporting. Moreover, the creation and continuous updating of these “bottom-up” data sets detailing serious human rights violations have not only been used to further the social movements, but they also indicate the necessity that digital activist have to gather, organize, classify, and perhaps more importantly, corroborate information in times of social unrest.

As long as Chileans keep taking to the streets, this civil revolution presents the opportunity to observe new ways of activism, including the use of independently-gathered data by non-traditional media and the collection of evidence and testimonies from victims of police and military brutality in the streets, hospitals, and prisons.

What can we, only relying on our remote gaze, learn from looking at the situation going on today in Chile? This movement has shown us how the public engagement of a fear-free generation and the development of a strong digital infrastructure are helping to shape collaborative data-based projects with deep democratic roots.

Lastly, let’s hope that these projects, among others, also shed some light on how social movements can be empowered and engaged by new ways of activism actively creating their own data infrastructure in order to challenge existing power relations, seemingly resistant to fade into history.

Tomás is a Lecturer in New Media and Digital Culture at the University of Amsterdam and a PhD researcher at the Institute of Cultural Anthropology and Development Sociology at Leiden University. His research is concerned with how newsmakers are appropriating digital technologies and how these innovations are transforming the infrastructure, temporality and form of the news-making process.