By Miren Gutiérrez*
In the context of the Cambridge Analytica scandal, fake news, the use of personal data for propagandistic purposes and mass surveillance, the Postgraduate Programme “Data analysis, research and communication” proposed a singular debate on how the (big) data infrastructure and other technologies can serve to improve people’s lives and the environment. The discussion was conceived as the second part of an ongoing conversation that started in Amsterdam with the Data for the Social good conference in November 2017.

We understand that four communities converge in the realisation of data projects with social impact: organisations that transfer skills, create platforms and tools and generate opportunities; the catalysts, which provide the funds and the means; those that produce data journalism, and the data activists. However, on rare occasions we see them debate together in public. Last April 12, at the headquarters of the Deusto Business School in Madrid, we met with representatives of these four communities, namely: 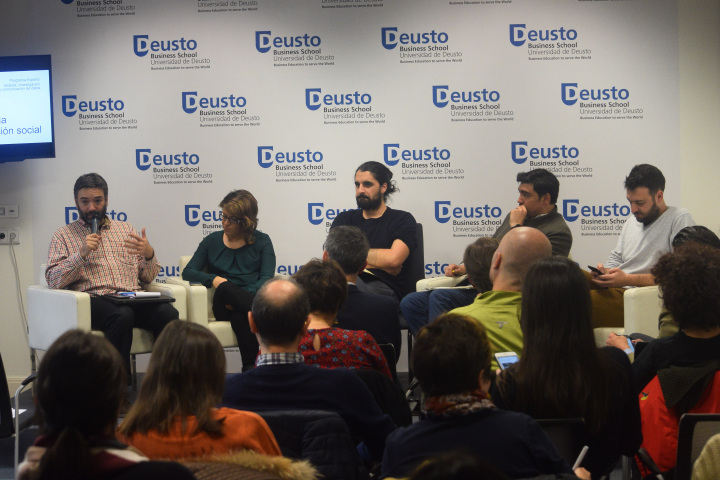 (From left to right, see picture), Adolfo Antón Bravo, head of the DataLab at Medialab-Prado, where he has led the experimentation, production and dissemination of projects around the data culture and the promotion of open data. Adolfo has also been representative of the Open Knowledge Foundation Spain, a catalyst organisation dedicated to finance and promote data projects, among others.

Mar Cabra, a well-known investigative journalist specialising in data analysis, who has been in charge of the Data and Research Unit of the International Consortium of Investigative Journalists (ICIJ), winner of the 2017 Pulitzer Prize with the investigation known as “The Papers of Panama”.

Juan Carlos Alonso, designer at Vizzuality, an organisation that offers applications that help to understand data through its visualisation better and comprehend global processes such as deforestation, disaster preparedness, the global flow of trade in agricultural products or action against climate change around the world.

Ignacio Jovtis, head of Research and Policies of Amnesty International Spain. AI uses testimonies, digital cartography, data and satellite photography to denounce and produce evidence of human rights abuses, for example in the war in Syria and the military appropriation of Rohingya land in Myanmar.

And Juanlu Sánchez, another well-known journalist, co-founder and deputy director of eldiario.es, who specialises in digital content, new media and independent journalism. Based on data analysis, he has led and collaborated in various investigative stories rocking Spain, such as the Bankia scandal.

The prestigious illustrator Jorge Martín facilitated the conversation with a 3.5×1 m mural summarising the main issues tackled by the panellists and the audience.

The conference’s formula was not conventional, as the panellists were asked not to offer a typical presentation, but to engage in a dialogue with the audience, most of whom belonged to the four communities mentioned earlier, representing NGOs, foundations, research centres and news media organisations.

Together, we talked about:

• the secret of successful data projects combining a “nose for a good story”, legwork (including hanging out in bars) and data in sufficient quantity and quality;
• the need to merge wetware and algorithms;
• the skills gaps within organisations;
• the absolute necessity to collaborate to tackle datasets and issues that are too big to handle alone;
• the demand to engage funders at all level –from individuals to foundations— to make these projects possible;
• the advantages of a good visualisation for both analysis and communication of findings;
• where and how to obtain data, when public data is not public much less open;
• the need for projects of any nature to have real social impact and shape policy;
• the combination of analogic methodologies (i.e. interviews, testimonies, documents) with data-based methodologies (i.e. satellite imagery, interactive cartography and statistics), and how this is disrupting humanitarianism, human rights and environmental campaigning and newsrooms;
• the need to integrate paper archives (i.e. using optical recognition systems) to incorporate the past into the present;
• the magic of combining seemingly unrelated datasets;
• the imperative to share not only datasets but also code, so others can contribute to the conversation, for example exploring venues that were not apparent to us;
• the importance of generating social communities around projects;
• the blurring of lines separating journalism, activism and research when it comes to data analysis;
• the experiences of using crowds, not only to gather data but also to analyse them.

Cases and issues discussed included Amnesty’s “troll patrol”, an initiative to assign digital volunteers to analyse abusive tweets aimed at women, and investigation on the army appropriation of Rohingyas’ land in Myanmar based on satellite imagery; Trase, a Vizzuality project that tracks agricultural trade flows (including commodities such as soy, beef and palm oil), amazingly based both on massive digitalised datasets and the paper trail left by commodities in ports; the “Panama papers”, and the massive collaborative effort that involved analysing 2,6 terabytes of data, and 109 media outlets in 76 countries; the successful diario.es business model, based on data and investigative journalism and supported by subscribers who believe in independent reporting; and the Datalab’s workshops, focused on data journalism and visualisation, which have been going on for six years now and have given birth to projects still active today.

The main conclusions could be summarised as follows:

1) the human factor –wetware— is as essential for the success of data projects with social impact as software and hardware, since technology alone is not a magic bullet;
2) the collaboration of different actors from the four communities with different competencies and resources is essential for these projects to be successful and to have an impact; and
3) a social transformation is also needed within non-profit and media organisations so that the culture of the data spreads far and away, and the data infrastructure is maximised for the transformation of the whole society and the conservation of nature.

* Dr Miren Gutiérrez is the director of the postgraduate Programme “Data analysis, research and communication” at the University of Deusto and a Lecturer on Communication. She is also a Research Associate at Datactive.