In 2013, Geraldo Alckmin, governor of São Paulo, announced a major advancement in policing Brazil’s most populous and economically potent union state: His administration had acquired the license for the use of the Domain Awareness System (DAS), a “smart” big data tool developed by Microsoft and deployed by the New York (NY) Police Department in order to fight crime and, most crucially, prevent further terrorist attacks in the United States’ financial capital. When introducing the DAS in the first place, the then NY Mayor Michael Bloomberg sustained that “[w]e’re not your mom and pop’s police department any more. We are in the next century, we are leading the pack” (26:50), thus associating state-of-the-art surveillance technology with an aura of modernity and a sense of local pride. Unsurprisingly, this kind of discourse was echoed when the program was presented to the Brazilian public during Alckmin’s re-election campaign. The corresponding advertisements were not short of grandiose promises: Not only would the software enable the interconnection and integration of hitherto separate police databases; it would also incorporate São Paulo’s vast network of private CCTV systems and, most prominently, automatically detect cases of “suspicious” behavior such as somebody trying to enter private property while wearing a motorcycle helmet. As the system “migrated” from one setting to another, the typology of threats it is supposed to fend off thus shifted accordingly: While in New York, the DAS’s implementation was mostly justified with the persistent, yet somewhat anonymous risk of terrorists attacking out of the blue, in São Paulo Detecta plugs into a well-established common knowledge of potentially “dangerous” subjects, places, and situations typically involving the (mostly dark-skinned) marginal as the ideal perpetrator. 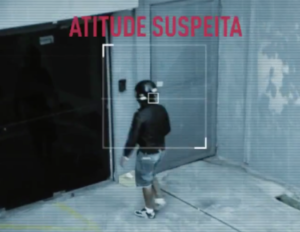 Significantly, while the DAS’s deployment soon provoked critique amongst civil rights organizations such as the ACLU, Detecta did not stir any similar kind of controversy in São Paulo – in spite of the fact that, until the present day, Brazil did not adopt any comprehensive legislation concerning the protection of personal data. Instead, public debate would soon revolve around the question whether or not the system was fulfilling the promises it was announced with in the first place. Alexandre Padilha, the Workers’ Party’s candidate to challenge Geraldo Alckmin, sustained that Detecta was a failure and did not substantially improve public security; symptomatically enough, other than that his campaign video drew upon exactly the same imagery as his adversary, depicting US-American police technology as a mainstay of his anti-crime policy. Meanwhile, media reports indicated shady business practices when the software was first acquired. Comparing the respective controversies about DAS and Detecta, it thus becomes apparent that they entail distinct notions of the “rogue state”: Whereas in New York, the DAS was criticized for its potential infringement of civil liberties, in São Paulo the case of Detecta would epitomize both incompetence and corruption, while privacy rights and abuses of police power were hardly broached. 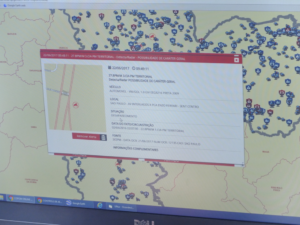 Meanwhile, PRODESP, a state-owned agency developing IT solutions for governmental purposes, was charged with “translating” the software so that it would serve the specific needs of São Paulo’s police forces – a process oddly referred to as the system’s “tropicalization” by several of my interview partners, both amongst and beyond São Paulo’s police forces. Given the fact that the government had acquired an “as is” version of the DAS, there was indeed a lot of ground to cover; and despite the accompanying support of Microsoft staff, initial results were mostly unsatisfactory so that Detecta remained dramatically underused, as an inquiry realized by the state’s board of audits soon found out. As I could verify during one of my field trips in late 2016, the version in use back then was indeed running at such a slow pace that it would complicate rather than facilitate police investigations; besides, the few of the “intelligent” CCTV cameras which were up and running would constantly give false alarms since they were unable to distinguish cars half-covered by traffic signs from individuals roaming the streets (the latter constituting a “suspicious” situation demanding review). However, apart from the apparent technical challenges to set up a running network of heterogeneous data bases and thousands of surveillance cameras, Detecta suffers from another major obstacle of a more institutional kind: In Brazil, police forces are divided in two different organizations, the military police (Polícia Militar, PM) and the civil police (Polícia Civil, PC). While the major task of the PC consists in criminal investigation and prosecution, the PM is charged with maintaining “public order”: crime prevention, street policing and accompanying public events, most notably. Since both units thus carry out emphatically distinct policing tasks, they are equipped with their proper data bases; and because their mutual relationship is a somewhat uneasy one to say the least, there is not much of an incentive to share information. By consequence, and although facilitating data exchange has been a crucial motivation to acquire Detecta in the first place, the promise of an IT-driven policing revolution is as yet being thwarted by the prosaic reality of institutional quarrel and mutual distrust which characterizes the coexistence of PC and PM.

While these drawbacks imply that the “real” Detecta is indeed a far cry from the omniscient – indeed, even prescient – policing tool which was originally promised to the electorate, it would be precipitant to squarely (dis)qualify the whole project as a failure. In fact, PRODESP has recently come up with a new, cloud-based version of Detecta – ironically enough, it scarcely resembles the product delivered by Microsoft any longer – which, as I could verify, seems to work a lot faster than its predecessor. The system no longer draws upon “intelligent” cameras supposed to automatically identify “suspicious” behavior, but it does incorporate an increasing number of license plate readers run by DETRAN, the municipal traffic agency. Vehicles can therefore automatically be traced as well as linked to information stored in further data banks such as the criminal record of the owner, or prior occurrences in which the car was involved. Although this may appear as a rather modest progress as measured by the flashy “pre-crime” campaigns disseminated by software giants such as IBM, various police officers I spoke to told me that the latest version did represent a palpable improvement in their daily routine. In this sense, Detecta’s “success” would have to be measured in terms of the incremental changes it triggers in both IT and institutional culture – a process taking place beyond the screen of governmental as well as corporate propaganda put up to convince the general public. It is this, unsurprisingly, the sober point of view shared by most IT experts as well as police insiders I have been talking to in the course of my research, and their perspective deserves attention – especially so if we are to develop a critical understanding of the processes at work here. 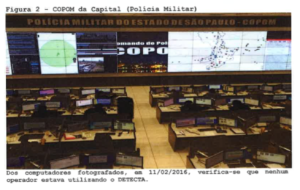 There is, however, yet another aspect under which an acritical focus upon Detecta’s “success” (or the relative lack thereof) tends to conceal a set of dynamics which certainly deserves attention – namely, to which extent the program both draws upon as well as fosters the emergence of public-private economies of (in)security in a city which is already heavily marked by stark socio-economic contrasts and the corresponding militarization as well as “citadelization” of urban space. While these tendencies are anything but new, it may be argued that they were further reinforced after João Dória, a party comrade of Geraldo Alckmin, was elected mayor of São Paulo in 2016. A businessman-turned-politician, Dória is both a hi-tech enthusiast and a fierce advocate of public-private partnerships; it was therefore only consequential that he would full-heartedly embrace Detecta and extend it through further projects such as Dronepol, a municipal police unit equipped with drones, and City Câmeras, a further initiative to establish a close-meshed public-private CCTV network. All of these projects rely upon a substantial involvement of non-state actors such as neighborhood boards, trade associations and the corporate sector – and despite official affirmations stating the contrary, it is plain to see how they were being hijacked by private interest groups from their very date of inception. It is in this sense that “success” and “failure” turn into profoundly relative categories unsuitable to orient any kind of critical research – unless they are re-read against the peculiar and irreducibly local genealogies of policing the urban (or, more generally, of governing through (in)security), that is. In any case, the board of audits’ affirmation that Detecta’s implementation “does not yet present effective results for public security” may sound somewhat naïve against this backdrop – emphatically public purposes might never have been at stake anyway here. Revisiting the peculiar notion broached by some of my interview partners, and extending it beyond a purely “technical” concept, it might therefore indeed be argued that the program’s “tropicalization” is not least about its translation from one specific diagram of power into another, a process which may teach us a lot about their respective modes of becoming. Far from sustaining that São Paulo confronts us with a more “archaic” or less “modern” configuration than New York (or any other city of the “global north” for that matter), it might still sensitize us for the contingencies and path-dependencies at stake when an increasingly “global” model of securitizing the urban goes “local”.

Claudio Altenhain is a PhD candidate of the international Doctorate in Cultural and Global Criminology. He is interested in Latin America, science and technology studies, and the anthropology of policing and crime.