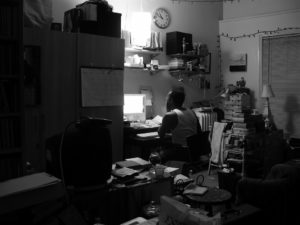 Participants: Helen Kennedy, Lina Dencik, Alessandro Checco, Noah Tamarkin, Srividya Balasubramanian, Roderic Crooks, Becky Kazansky, Catherine D’Ignazio, Lauren Klein, Guillén Torres, Dimitra Milioni, Venia Papa, Stefania Milan, Stefan Baack, Lonneke van der Velden.
Date: 14th of September, 2019
Bremen, Germany.
Description:
Mainstream depictions of our everyday experiences of datafication (Kennedy 2018) increasingly point towards a future in which human agency will be overridden by rogue Artificial Intelligences. In this context, data activism has emerged as a critical and dissident exercise showing how that arguably inevitable future is not only preventable, but in fact is already being challenged by actors devising sociotechnical strategies to gain their agency back, proposing in the meantime alternative versions of datafication. In the continuum that goes from seemingly non-political  everyday experiences of datafication, to explicit acts of data activism, academia has mostly focused on the latter. However, many practices populate a blurry area in which it is not easy to distinguish one from the other. In this interzone, data activism isn’t done by the usual ‘experts’ or institutions, but still implies forms of political mobilization that strive for agency and recognition.
Thus, if datafication is also  “made and unmade” through everyday practices, as Helen Kennedy has suggested, what could be the role of mundane actions in shaping alternative futures beyond the bleak imaginations of the most pessimist science fiction writers? We invite you to join a discussion in which the politics of everyday experiences of datafication are questioned to explore their emancipatory dimension. Our goal is to explore the everyday-explicit activism continuum to question and expand the notion of data activism, to prevent it from othering practices of political engagement which are not immediately recognized as activism. We are interested in finding out what is needed within our research programmes to recognize, capture and foster the political dimension of everyday practices relating to datafication. Can we help, from the privileged point of view of academia, to give them more political presence? Can we make them more powerful through the knowledge we generate? Or should the mundane be left alone precisely to preserve it as a locus of resistance, made possible by its subtle and hidden nature?
During this workshop, we will discuss the role of the everyday in the creation of power asymmetries emerging from datafication. Our focus will be twofold: First, we would like to approach the hitherto unaccounted practices that, as datafication continues to exploit more aspects of our lives, may become -or already are-  spaces to battle our data hungry overlords. Thus, we will explore how mundane data (Pink et al. 2017) and everyday activities acquire a contentious nature that turn them into a tool for political intervention. Secondly, we will reflect around the quotidian affective dimension of mobilising data for political purposes, looking at the everyday frustrations that result from working with data in a context of widespread injustice and human rights violations, and highlighting the importance of refocusing our attention in the human dimension to counter data centrism.
Schedule

– Locating resistance in the everyday of data-driven governance.  Lina Dencik (School of Journalism, Media and Culture, University of Cardiff).

– Dukaans, Portals and Database: Encountering the State in an Era of Digital Governance in Rural India. Srividya Balasubramanian (Department of Anthropology, University of Leipzig)

– The hidden, meta- and anti-affordances of data activism: a discursive-material analysis of how data activists contest the power of social media. Dimitra Milioni & Venia Papa (Cyprus University of Technology, Department of Communication and Internet Studies)